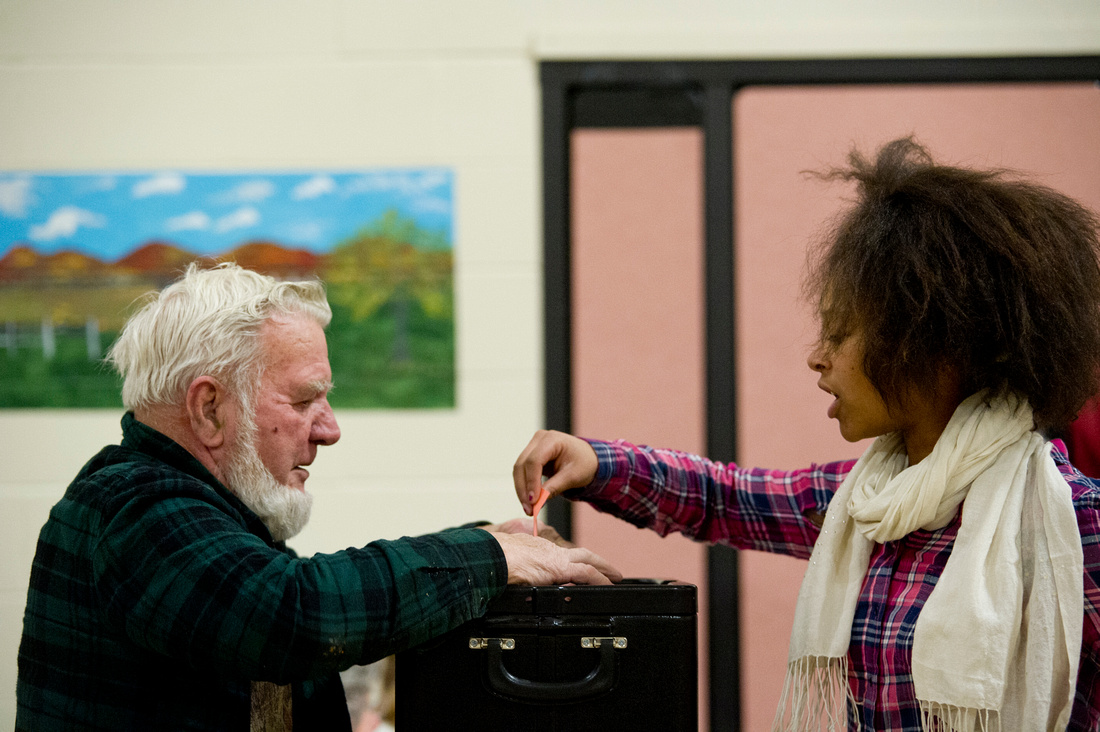 Roland Potter, 83, oversees the ballot box as Cora Swanberg casts her first-ever vote on Monday at the Sharon school meeting. I have been coming to town meeting as long as I can remember. I don't have TV so it's better than sitting at home. The past few years I have been becoming more interested." explained Swanberg.

I have never seen a higher concentration of people knitting in a public space until today. It is town meeting day, when citizens across Vermont  debate and vote on topics we don't think much about the rest of the year. Road projects, trash pickup, and other less sexy aspects of life become the focus of tension and consternation among those gathered in this state’s town halls. At times it is like church, but the religion of God has been replaced by the religion of bureaucratic tradition. And knitting is just another way to pass the time when debate drags on.

I am dressed in what I imagine to be fitting Vermont attire: A plaid shirt, a long brown Carhart jacket and sunglasses with an American flag print covering the frames. I must shoot three town meetings today, two of which start at the same time, 9 a.m. I choose to start out at Strafford’s town meeting. Every year it is held in the historic old town hall building that sits atop a small hill overlooking the green, a public square fenced in by an assortment of homes.

Strafford’s white, wooden town hall is one of the oldest buildings in the town, founded in 1761. It is - 9 degrees outside and it doesn’t feel much warmer inside as I enter with a throng of Straffordians. (I assume this is the proper spelling. Anyone who prefers “Straffordiites,” feel free to speak up.) I introduce myself to a woman handing out name tags just inside and explain I am working with the local newspaper. “Just don’t get in the way, make sure you…” she says, making a hand gesture and trailing off in a search for the right words. “I will make myself small,” I assure her.

Unable to find a seat inside the historic town hall in South Strafford, Becky Proulx took a seat on the floor and knitted as she listened to the proceedings at the Town Meeting in Strafford, Tuesday, March 4th, 2014.

A crowd of about 100 people act as a furnace, eventually warming the room to a bearable level. As it fills to capacity I am scanning for moments and compositions, my brain working to take in this place and its people. Once in a while a bald island sprouts from the ocean of white hair I see around me. Older folks seem to make up the majority of the crowd. Maybe they’re the only ones who can make this event -- their retired lives creating a schedule that allows for weekday morning rituals like this one -- or maybe they’re the ones who most appreciate this tradition, going back more than 100 years. 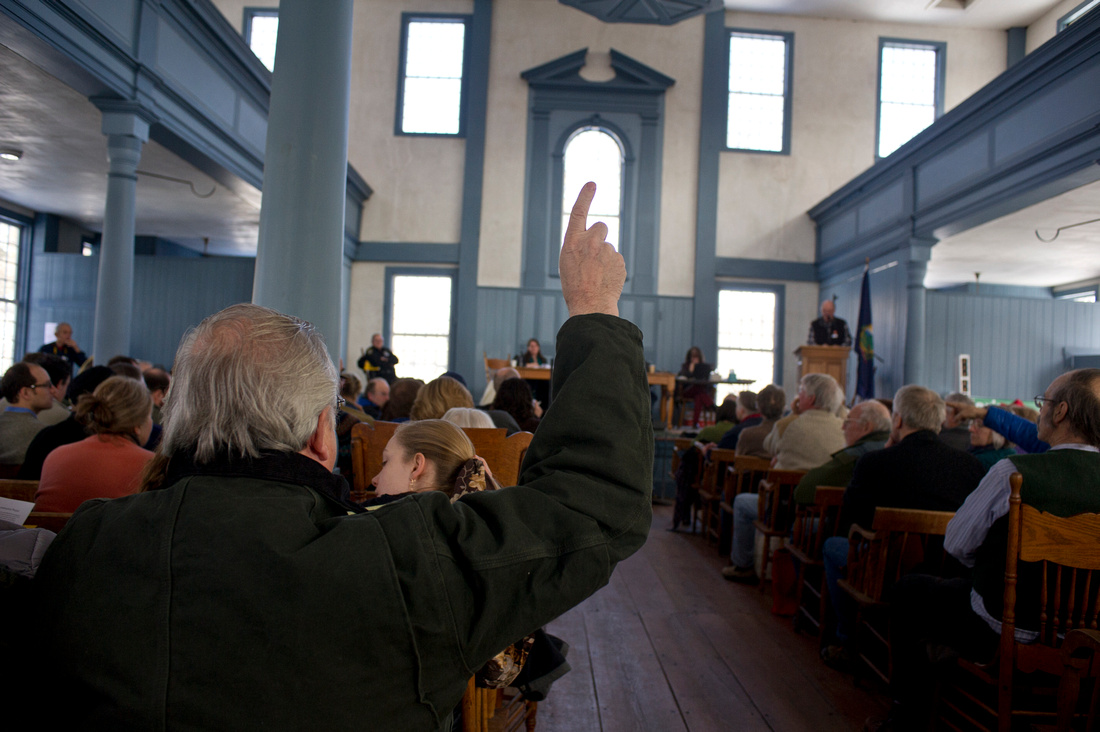 Greg Lewis raised his hand and waited to be recognized by the moderator, Kurt Albee, in order to voice his views during the long a tenous debate over Article 2, at the Starfford Town Meeting, Tuesday, March 4th, 2014.

But Strafford is just one town among many partaking in today’s meetings, so I make haste for my car and sprint across dirt backroads that snake their way through the hills and woods between Strafford and my next stop, Chelsea. Once there I know I’m close to the action, but am still unsure which historic building is home to this town’s meeting. A young man at the cash register of a general store and a farmer answer in unison when I ask them where the meeting is being held.

“That brick building over there.”

A cadre of older women and young girls selling mountains of baked goods greets me inside Chelsea’s Town Hall. I exchange pleasantries and make my way to a set of double doors, squeaking them shut behind me. Inside, a moderator is droning on about an article -- an issue to be discussed before being voted on. In the back of the room, rugged looking menfolk stand, possibly because sitting is for wimps. Meanwhile, children are sprawled out at the men’s feet playing with iPhones and tablets. A sort of knitting for the next generation. Their way to pass the time comes on a digital screen.

I creep up the stairs to a balcony to get a higher vantage point of the proceedings. A mixture of seniors and youth are haunting this upper level, quietly observing from above and avoiding the din of debate below. I find myself enjoying the elevated position and the angles it provides, being among these ghostly observers in a dusk-like light. As the proceedings carry on, the differences in procedure each town adheres to become apparent. 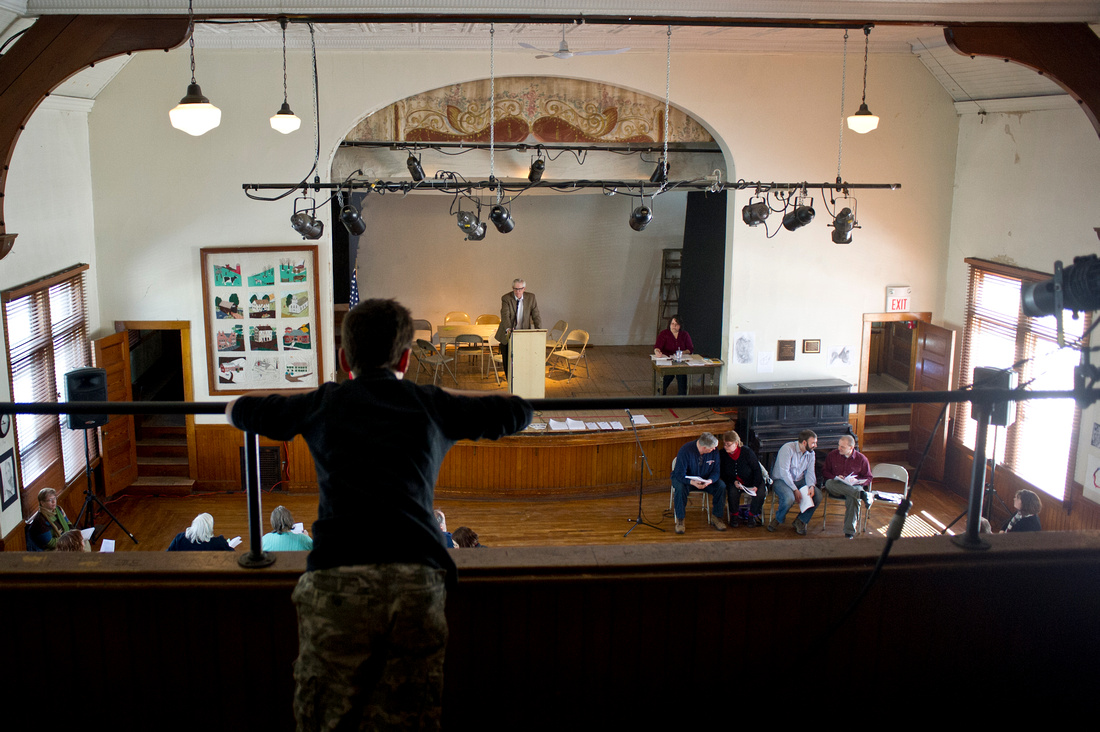 Hayden Stumpff, 12, stands and watches over the proceedings of the Chelsea Town Meeting "I like town meeting, I find it interesting." said Stumpff. Tuesday, March 4th, 2014.

Here, no one is wearing name tags. Instead their hands are stamped to signify they have signed in, and are therefore allowed to speak and vote. The select board, a group of local officials moderating the discussion, is not sitting above the crowd on a stage like they were in Strafford. Here, they’re on ground level, in chairs facing the townspeople.

It’s an interesting dichotomy between the board members and the crowd. Most of the officials don’t seem happy to be here engaging with the people they serve. They are showing a defensiveness, and a disinterest that makes the atmosphere more adversarial than congenial. But on each board there is a charismatic point man, employing humor in short bursts to counter the seriousness and hostility generated when discussing such seemingly mundane subjects as recycling procedures and the costs of road maintenance. 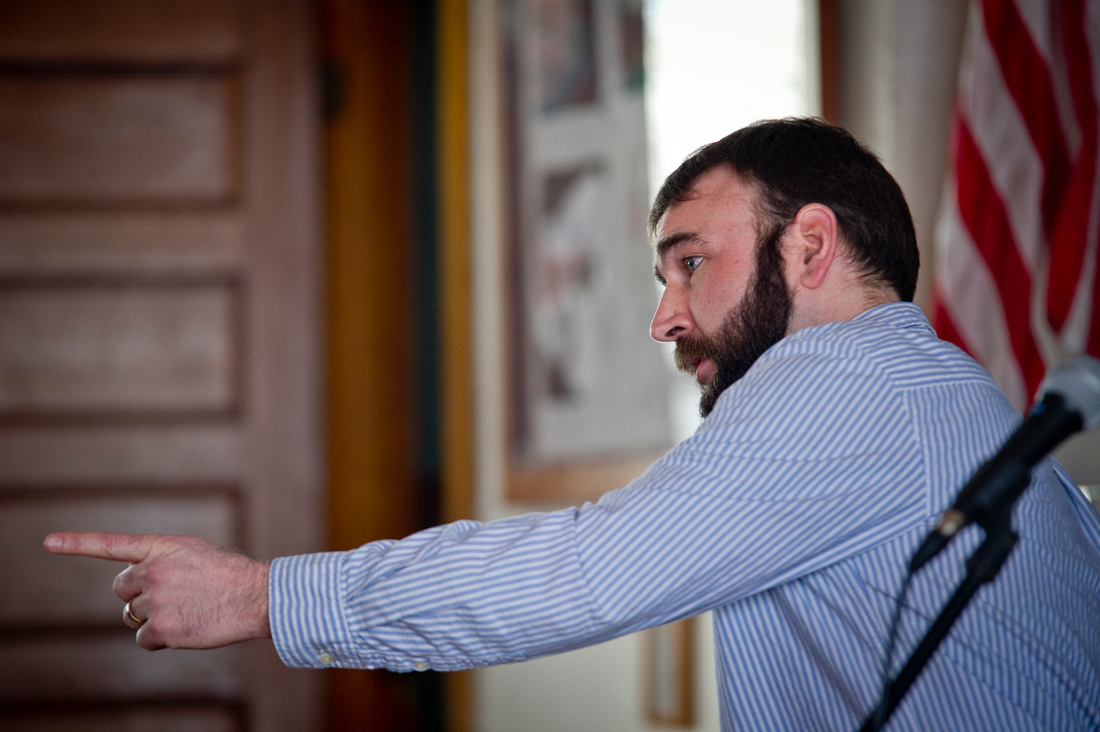 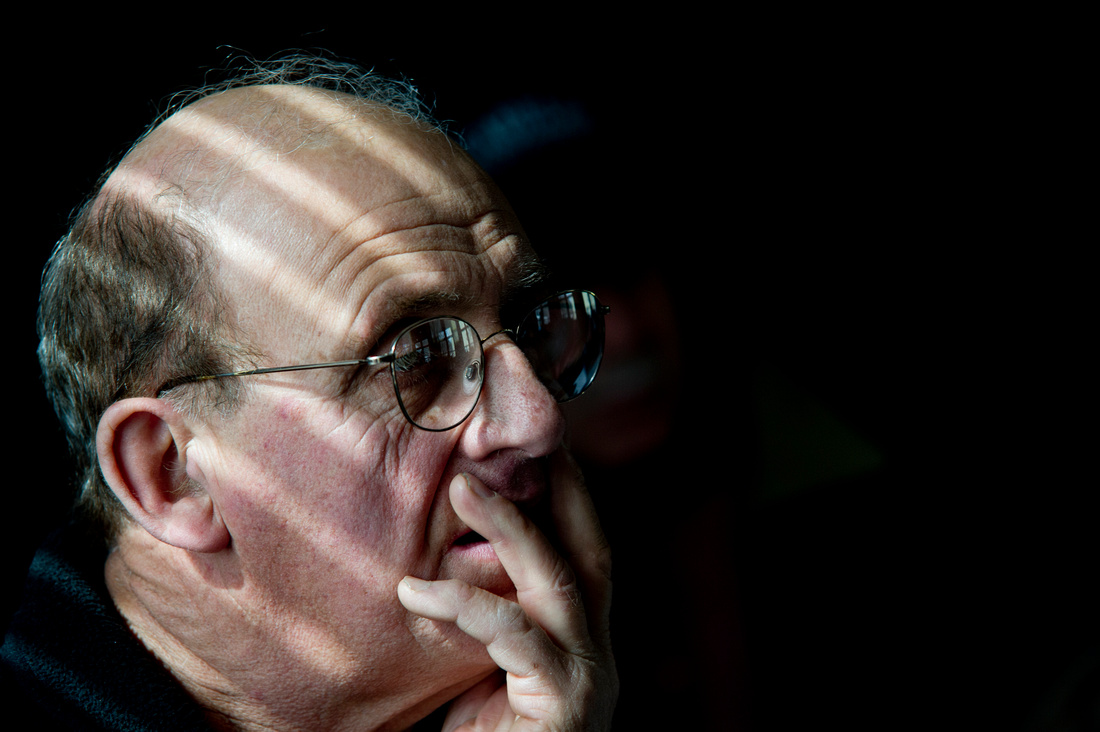 Frank Keene, listens intently as a select board member explains how they wish to save for future road projects during the Chelsea Town Meeting, Tuesday, March 4th, 2014. Keene is also the towns Cemetary Commisioner "I am very interested in town affairs. I want to make sure the money is spent wisely."

The point man in Chelsea is a board member. But in Vershire, the next town on my day of documenting bureaucratic tradition, the responsibility of smoothing ruffled feathers is handled by the moderator David Hooke. He is Mr. Charisma.

Vershire’s town hall, where Hooke has been presiding over town meetings for the last 15 years, is a miniature of Strafford’s. With the same woodwork, same white paint, and a similar albeit smaller square spire with a weathervane affixed to its apex, the town hall in Vershire seems close to full with a crowd of about 30 people.

After my third “I’m-here-with-the-newspaper-to-get-photos” introduction, a woman gestures to get the attention of Hooke, a man with a thick beard that small birds could inhabit. “Mr. Moderator, may another member of the press join the meeting?” the woman asks. Meeting attendants turn around to get a look at the press in question -- there will be no being small here. 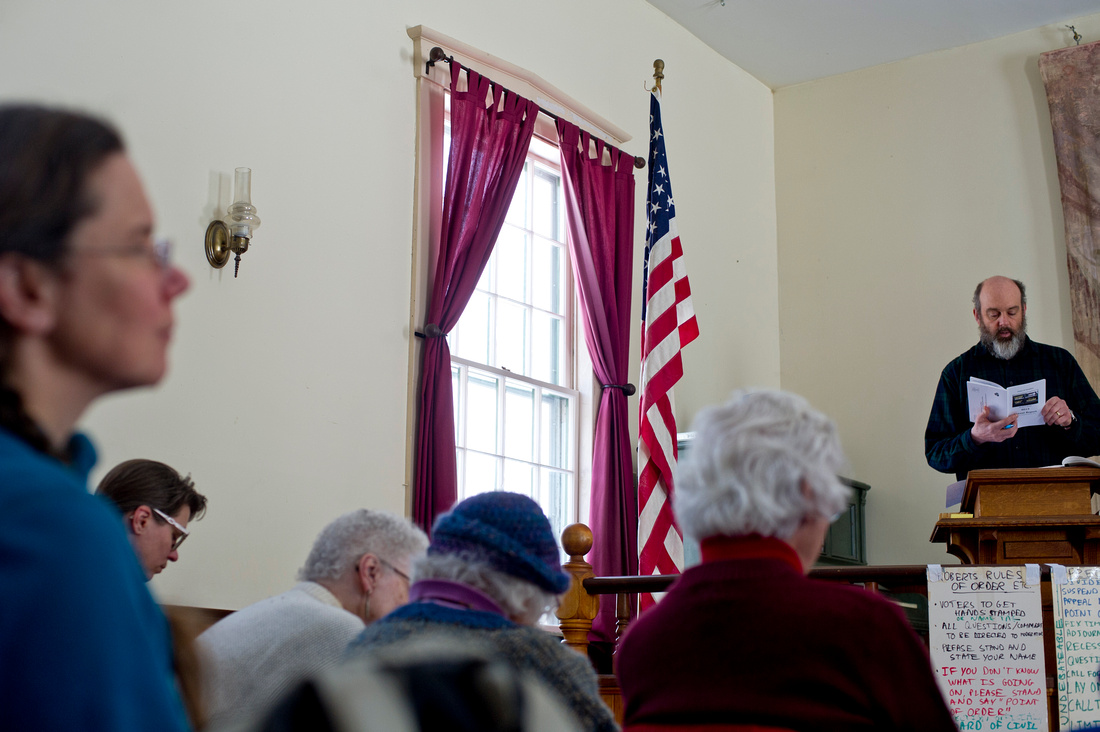 Vershire Town Moderator David Hooke, reads the description of an article during the Vershire Town Meeting, Tuesday, March 4th, 2014. Hooke has been moderator in Vershire for 15 years. "The most important thing is to keep everyone on board…and having a sense of humor about it." Said Hooke.

The hot topics of debate here are trash and recycling. People raise myriad issues, questions and concerns about all aspects of the subjects. Some sort of consensus is reached and the meeting is adjourned. As I wait to gather names of some of the people I photographed, a few older women introduce themselves and ask me about my affiliation with the paper. They invite me to stay for the after-meeting lunch; I immediately hear the voice of my photojournalism professor at Ohio University, Marcy. “Never take anything the people you photograph offer you.”

This ethical stance has always been interesting to me. As photographers we take so much. We take people’s time, their stories, their moments and make them into something tangible that we slap our name on and make our own. But we’re not allowed to accept their invitations to lunch, or coffee, or a beer after work. At least according to Marcy and scores of other old school photojournalists. 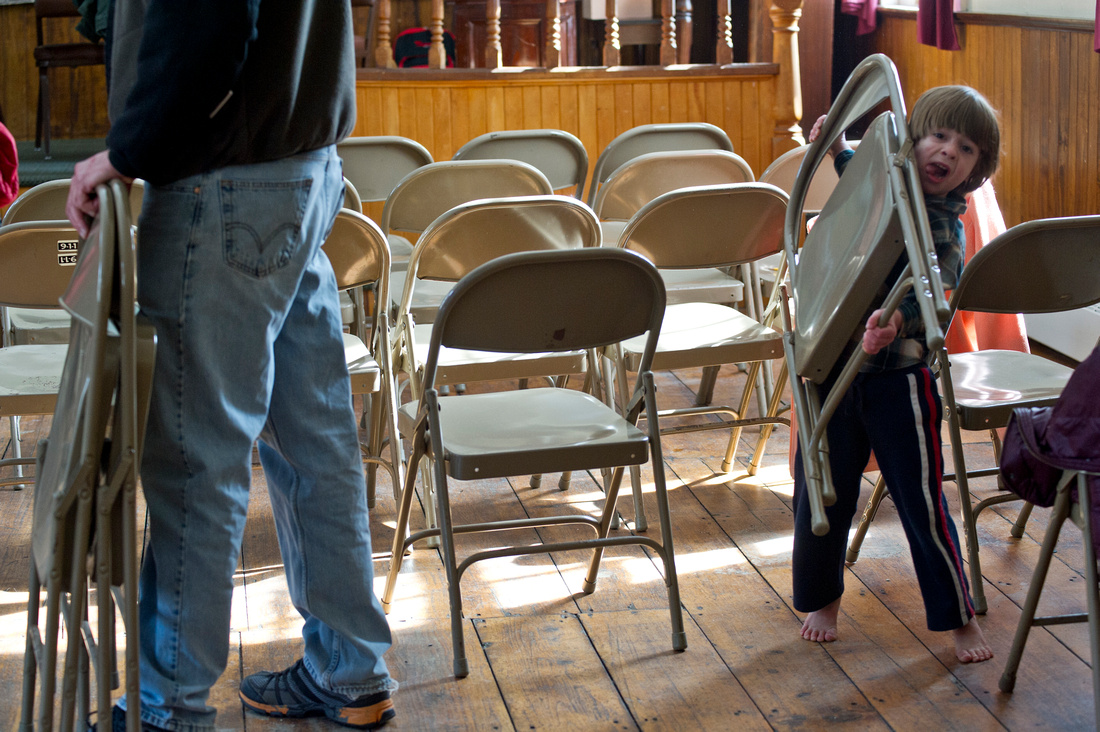 "Bare feet coming though" exclaims Carter, 4, as he gets into the community spirit during his first town meeting by helping move and stack chairs at the Vershire Town meetings conclusion, Tuesday, March 4th, 2014.

I don’t have the heart to say no to these kind people, so I assure them I will take a gander at the lunch downstairs after I get my caption info. Then, I make my escape without notice. Having dodged a free lunch, I think my deception would have made Marcy proud. It’s a strange task to be the eyes and ears of a place and interact with its people so intimately, while also not partaking in some of those rituals of community.

As photographers and journalists we walk a fine line between being an insider and an outsider. Someday I hope to strike the proper balance. But for now, I’ll just have to be satisfied with observing the knitters and the debaters, and documenting life’s moments as they come across my lens.