(The following is a transcription of the interview in its entirety. The interview was organized, conducted and recorded by Zach Nelson while speaking to Thomas Stierhoff on 3.21.2013) 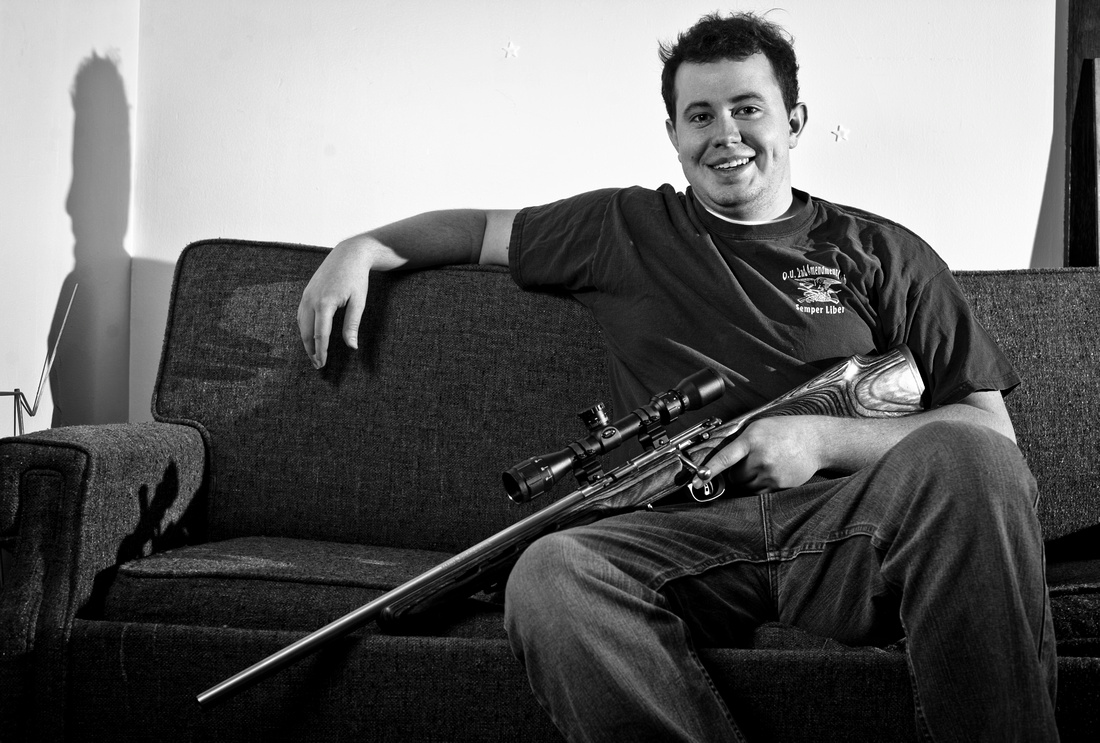 Thomas Stierhoff: “Honestly, it started when I was pretty young just because both my parents were cops. So by the time I was born, my mom was taking care of me and my dad would come home everyday and he would have a gun with him, so honestly it was pretty normal for me just to see a gun every day, like no big deal for me. I started shooting when I was pretty young, just a BB guns for the most part. My dad was very cautious as to exposure, so I didn’t really shoot a whole bunch [of] –I don’t want to say real guns—but I didn’t even shoot a 22mm until I was in late elementary school maybe, and that was only with my dad. Safety was always the most important lesson instilled upon me at a really young age. Knowing that it’s something that could be potentially dangerous if you do it irresponsibly.”

Question 2 – Why do you choose to have firearms?

Thomas Stierhoff: “The interesting thing I find about firearms, like, ever since I was young I was fascinated by the science of it. I thought it was interesting. Like, a round of ammunition and just the energy, and if you do certain things to it correctly you can have a projectile travel a thousand feet per second, and you can still do that 100 times and have it still be accurate. I found that part fascinating and how it works: all the mechanical parts, and I am an engineer so I kind of like that stuff. After I joined the [Ohio University] 2nd Amendment Club, I started getting into the actual shooting parts of it, which – I was always shooting, but I never really did it correctly. So then, I started shooting correctly, and after a while, I kind of got into teaching other people how to shoot, which I found out I actually like doing that. It’s always neat teaching other people new things and seeing them get better. After being an officer of the club I kind of started getting into the politics of it which I never really liked, but it’s kind of interesting seeing how two people can see something happen and have two completely different opinions on what should be done.”

Thomas Stierhoff: “I wouldn’t say there is much of an aspect I take pride in as a firearms owner. I don’t know, honestly, it isn’t something I want to walk down the street and be like ‘Hey look at me, I own a gun ‘cause I am born and raised all American’ or whatever. But if I can say there is anything I am proud of as an individual it can be that being a responsible firearms owner is something I can be proud about. As an American, it’s something to be proud about just for that fact that not all countries give their citizens rights to own a firearm. We have a lot of freedoms we take for granted.”

Thomas Stierhoff: “I’d say the thing I am most concerned about as a firearms owner is discretion. I feel like that’s a big part. It’s not apparent, ‘cause you know I am getting interviewed right now. But it is always a good idea that you don’t want anyone to know that you own a gun, if you can help it, unless you trust them. I am doing this [interview] just because I am in the [2nd Amendment] Club. I feel like a lot of people, if they have no exposure, or have never shot a gun or might have had a bad experience…it’s kind of easy to label. I guess a lot of irresponsible people kind of ruin it for a lot of us. My brother doesn’t really actually believe in guns, which is interesting because both of my parents do. But my brother, he lives in Chicago, so you can blame the city. But it’s interesting seeing how – he always says, like, ‘I don’t know why you go out with your redneck friends and you’ll got shooting,’ and I tell him it’s what I enjoy. If I want to do it, why not?”

Q - You brought up the point about discretion and I have never heard anyone talk about this, can you elaborate?

Thomas Stierhoff: “Yeah. You could say that a lot of gun owners are misrepresented because a lot of people don’t want anyone else to know that they have a gun. Like my father, he really keeps to himself. He told me a story randomly about how so-and-so from work were talking about guns. They had a similar interest as my dad. So I asked him, “What did he say when you told him you did this?” and he told me, “Oh, I didn’t join the conversation because I don’t want them to know.” I feel like nothing good can come from other people knowing that you have guns. I don’t know, one thing at college I am really concerned about is obviously being able keep guns away from people who shouldn’t have access to them. I have a gun safe in my room; if I can’t fit it in the safe I put a [trigger] lock on it. I will take out parts of it that will make it impossible to fire. The only people that do know it are my brother and my roommates, who I tell because I feel like the have a right to know. “

Thomas Stierhoff: “I feel like one of the things that get a lot of people in trouble is always remembering how important a lot of these [safety] things are. The way I try to be reasonable and help teach other people in my club to be responsible gun owners, really as a large part, just know what you are talking about; having the knowledge to back up your standpoint, your beliefs. I feel like a lot of people might like to shoot guns or like certain aspects of guns, but if you ask ‘Why do you believe that way?’ they might have no reason, like, ‘oh it’s fun’. I feel like if you have a little knowledge as to why you do what you do, you might be able to have a better conversation with other people. You will always meet other people who don’t have   similar beliefs as you, and if you don’t know what you are talking about, you will get run over.”

Q – What are the irresponsible people doing to ruin firearm ownership for you?

Thomas Stierhoff: I feel like some people who do conduct themselves in an irresponsible manner – honestly, it always starts with some basic safety thing. You might go to a range and someone is doing something you know is wrong, [and] even if you ask them to stop but they still keep doing it, it shows disrespect to other people and it makes everybody look bad.”

Thomas Stierhoff: If I could change anything, other than the prices right now, I’d say it’d be nice if it was more common. Like right now usually when I talk to someone they’re like, ‘Oh you shoot guns? That’s cool!’ I don’t know. I wouldn’t say it’s uncommon, but not maybe at my age group [is it] the most popular thing right now. I couldn’t tell you why that is. If I could really change anything I would have gun safety in school, it’s kind of off topic, but basic safety courses when you’re younger, so it’s not so foreign. Exposure. I feel like a lot of people are not exposed, so it’s foreign, so they might just draw a conclusion without any knowledge and say, ‘Oh I don’t like that,’ or ‘that’s bad.’ I feel like some positive exposure [would do] a lot of people some good, ‘cause not everybody is a gun nut. Just because I have a gun doesn’t mean I am gonna shoot somebody, ‘cause I am a pretty mellow guy.”