(The following is a transcription of the interview in its entirety. The interview was organized, conducted and recorded by Zach Nelson while speaking to Andrea Adams on 4.2.2013) 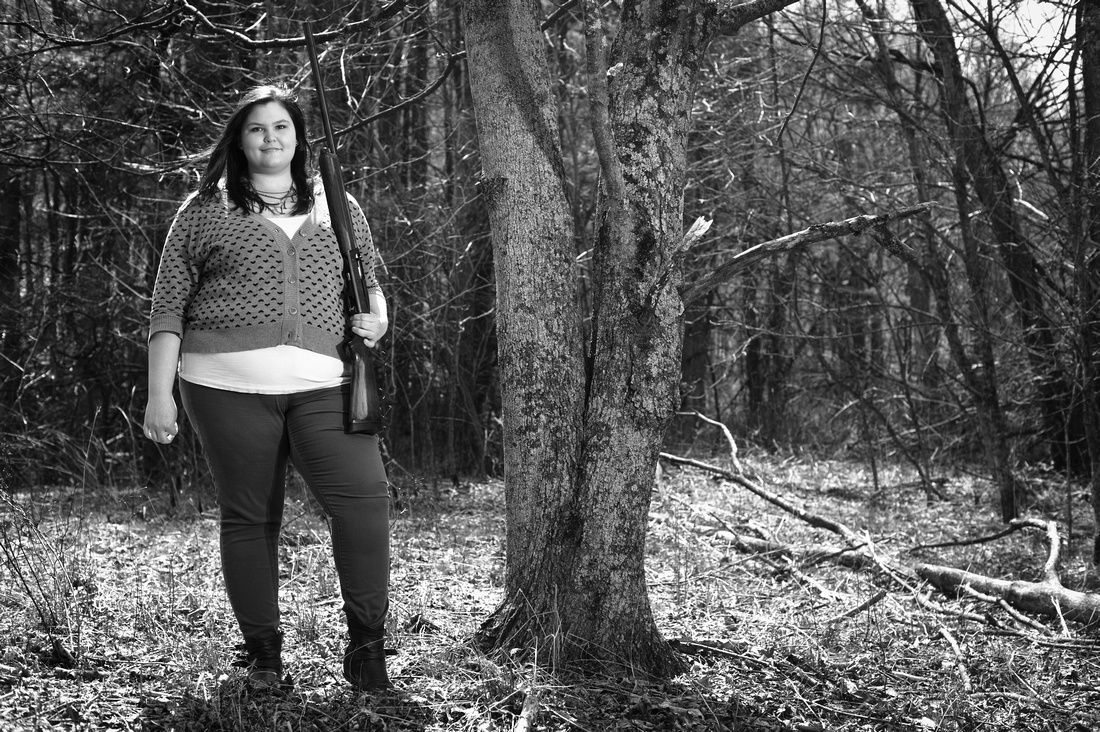 Question 1  - What is your personal connection with firearms? How were you introduced to them?

Andrea Adams: “With firearms, I started out with a family thing. My whole family hunts, they all target shoot and all that stuff. I started out at a young age of about three; I started with BB guns.”

Q- You have been target shooting how long now?

Andrea Adams: “17 years. I have been shooting BB guns since then, just target in the yard, then moved from that to actual, like, pellet guns to 22mm-Rifles to trap shooting starting at about [age] 15.”

Question 2 – Why do you choose to have firearms? Why is having a firearm an important factor in your life?

Andrea Adams: “I mean, shooting firearms in part of my heritage, so it’s something that’s really dear to me. It’s something that I share with my family. Along with that, I find great enjoyment in shooting, like, it’s a very good stress reliever. I deer hunt as well as shoot targets, so when it’s in season it’s cool to go out and shoot a deer and then bring it home. And we do eat our own deer; we don’t just throw it away or anything, so we actually use that. We have a lot of Indian in us so it’s kind of pulling that [aspect] in.”

Question 3 – What makes you most proud as a firearms owner?

Andrea Adams: “Wow, that’s a hard question. Probably when I see other people coming to it or see other people I have introduced to firearms and really enjoying it and breaking stigmas from them and, like, showing them how to do things properly. And that there is a lot of enjoyment to it and that it’s not just something people just want to do versus…like it’s kind of one of those things that after you get doing it you want to do and it’s not always bad thing.”

Q – Can you just say again what you take pride in, like the intro part, because you sort of rushed into it.

Question 4 – What is the hardest part about being a firearms owner? You had mentioned yourself that there is a stigma, so is there a stigma or negative association that you wish was different?

Andrea Adams: “There is definitely a stigma and there are definitely negative associations depending on who you are talking to. I think the hardest part about being a firearms owner is people - who don’t have the knowledge and aren’t there - that have this like, ‘big redneck, you’re just going out there shooting everything and tearing things up’ and the media also portrays that as well. And you have all these people throwing out things like, ‘It’s a semi-automatic assault rifle.’ Well, the shotgun I was using is a semi-automatic but it doesn’t have the capacity that, you know, an AR-15 has. So I think just false information and people think they know what they’re talking about or hear the things from media and just go crazy with them without realizing [that] what they mean is a big part of it. And the stigma - it’s basically a stereotype, you know? You have to introduce people to it, and then make them realize that it is a stereotype and that it shouldn’t exist.”

Q- So how does that make you feel when you feel like you get pigeon holed?

Andrea Adams: “It really offends me and really upsets me when people are using things, like the ‘semi-automatic’ term for example, and are like ‘all semi-automatic weapons should be banned.’ It’s like, whoa, whoa, whoa! Like, you clearly don’t understand what the term semi-automatic means and it should be… you know, some people think that AR-15s should be banned but again referring back to my 12-gauge shotgun, it is a semi-automatic weapon, but it only holds 3 shells when it has a plug in it. So, it obviously does not have the same capacity. So it really upsets me and really offends me when [people] jump straight to conclusions. From being around this area I also still have the stigma of being the redneck person who is just going out shooting guns like crazy and that is just not me. I try to refrain from getting really upset about it, and talk to people and be like, ‘Hey look, you know, this is what this is, and if you ever want to go shooting sometime…’ You know just try to be informed and not just jump straight to conclusions.”

Andre Adams: “To be a responsible gun owner, I think spreading knowledge is extremely important, trying to break that stigma, trying to get people more involved. And if they are not interested in being involved at all, [then] trying to make them realize that while they don’t have to be involved (because that is a choice), but they shouldn’t just jump to conclusions. If they don’t want to be involved and they want to be an advocate against it, then they should have all their facts right. So just, you know, being a person that you can come to and talk to about it and if you have question[s], I will answer them honestly and then you can use that against me in the argument if you want, but that’s how I feel.”

Question 6 – What do you wish was different about being a firearms owner? Looking towards the future what would you change?

Andrea Adams: “That’s a hard question because I don’t feel like there’s anything that I would personally change significantly other than maybe just having more of a positive light on it, like, having the situations where you have the school shootings that have been happening recently, not putting such a negative connotation on something that expands way past there to legitimate things. Like, there’s a lot of people, not necessarily around here, that have scholarships from shooting, trap shooting and stuff, and there [are] a lot of legitimate sports that are involved. Shedding light on that and getting that out of like an underground culture would be something I would like to see happen.”