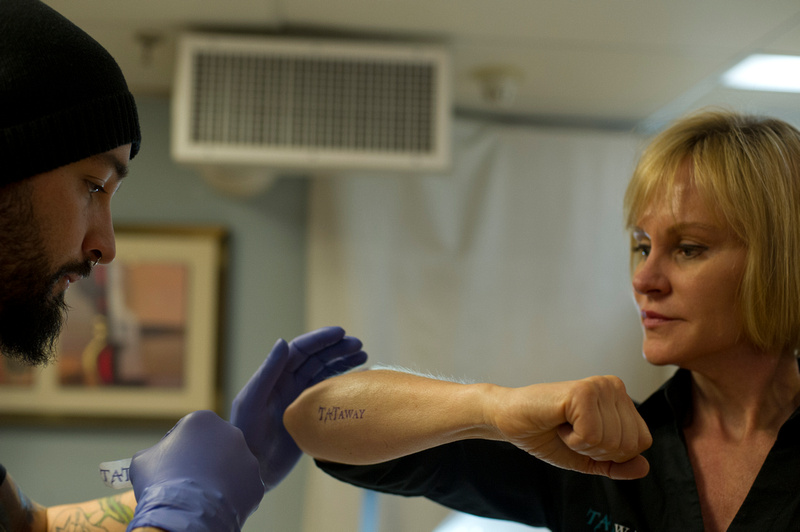 Phil Marandola stands, noms on a piece of pizza and chats with his sister, Maia, meanwhile his mother Carmen laughs bodily as she shaves Phils lower back.

Phil is getting a tattoo he doesn’t even want, and he is getting it in a place because the irony and hilarity of it is too good to resist. Phil is getting a lower back tattoo, a “tramp stamp” if you will. The message that will be emblazoned above his hiney is not “swipe here” or “mind the gap” but rather TatAway, the name of the business that he, his mother and two sisters have built from the ground up. Their business is laser tattoo removal, now with locations in Boston and New York City.

Today Phil, his mother Carmen and his two sisters Chelsea and Maia are so confident in the quality of the process their PicoSure Laser tattoo removal system achieves that they are all getting TatAway tattoos in order to have them removed -- all for the sake of science of course.

“ We all started kicking around the idea of it as a joke but the idea developed into something. We want to develop case study on different age groups and genders possibly the effectiveness of the Revlite (Qswitched laser) VS. the  PicoSure.” explained Phil.

Tattoo removal is a well developed science but also an unpredictable mistress. “There are several variables that factor into the tattoo removal process. The laser breaks down the ink but does not remove the ink from the body. Your body is what in all actuality is doing all the work, if you are really healthy the process will go faster.” Although TatAway has been open for two years and done over 5000 treatments, the team at TatAway is still looking to delve deeper into developing their own specialized knowledge of best practices with the best tools on the market.

It’s easy to see that the team at TatAway is all about serving people. They are all people-people. During the tattoo festivities that were going on in the TatAway office in Boston a client showed up without an appointment. It was no problem for the team. It was as though another friend had popped in for a visit and within minutes Chelsea and the client had donned their protective eyewear for another quick treatment of an upper arm tattoo. Its took longer to prep and numb the area than it did to laser the tattoo. There were no tears and no cries of horror or the smell of burning flesh, it’s insane how quick and efficient the process is.

The most interesting fact about all this is that once the process is done your skin is wiped clear, no scarring, a clean slate. This is why people are coming to TatAway, not just to have a regrettable tattoo removed but also to free up fresh canvas for a master work they will be proud to display in the light of day.